Collection name: yuan Datou in the third year of the Republic of China

[collection appreciation]: yuan Datou is one of the main currency in circulation during the period of the Republic of China. "Yuan Datou" is a colloquial name for Yuan Shikai's coin series, which is strictly called "Yuan Shikai's coin carrying Jiahe silver coin"“ "Yuan Datou" is known as the treasure of silver in the field of currency collection. It is the most popular and influential silver among nearly a thousand kinds of modern silver coins in China, and it is also an important role in the reform of modern Chinese currency system. As the leader of warlord coins in the Republic of China, "big head" series is no stranger to coin collectors“ The birth of "yuan Datou" coin is also the inevitable result of coin development. After the revolution of 1911, Yuan Shikai issued coins to solve the problem of military expenditure and improve his political status, which got its name because of the side image of him.

In recent years, the model coins of machine-made coins have gradually attracted the attention of collectors. There are three types of model coins: one is used to test the working condition of the mint. So it is commonly used as base metal (such as silver coin copper sample, gold coin copper sample, silver sample); The second is used for filing, often using the same material as the currency (such as copper, silver, gold and gold); The third kind is for sample money, which is submitted to the central or higher authorities for approval. Looking at the modern machine-made coins commissioned by the Chinese government to engrave steel molds on behalf of foreign countries, the patterns they present are exquisite and vivid. It is only in the protruding male mold that it is possible for the sculptors to display their superb skills and complete the three-dimensional effect of the undulating patterns. The engraving of words according to the drawings is even more meticulous, but it is easy to carve prominent words on the male mold, Until the surface is smooth and smooth, and the works fully reflect the unique charm of Chinese calligraphy. 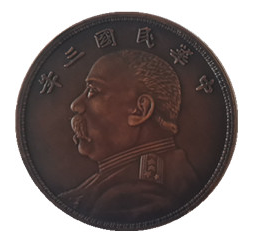 This coin is yuan Datou of the third year of the Republic of China. The collection is in good condition. It is well-known and has clear patterns. On the front of the coin is a side portrait of Yuan Shikai. The depiction is fine, the lines are smooth, the fine brushwork is exquisite, and the hair and beard are clearly visible. It is extremely meticulous. The six characters of the third year of the Republic of China on the top of the coin are clear and neat, and the two Jiahe on the back interact left and right, and the lower is tied, The decorative lines are uniform in thickness, smooth and natural in nature, with strong relief feeling and concave and convex in shape. The characters of Zhongzhu Yiyuan are upright and neat, beautiful and elegant. There is no doubt that they are authentic and have collection value. 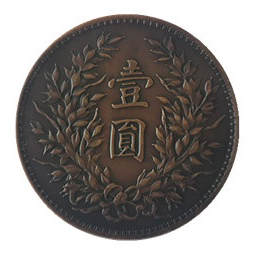 Yuan Datou coin in the Republic of China was regarded as the classic coin of the century, not only because of its wide spread and the most varieties, but also because of its collection of cultural relic appreciation value, historical textual research value and coin collection value, No matter from which angle to explore this coin, it is rare in the market. Due to the serious wear and tear in the use of currency, the products are seriously damaged, and few of them can be well preserved. As a result, collectors began to pay attention to the model coins. Although some materials are not as precious as circulating coins, they are rarely damaged because of their appearance, which is also pleasing to the eye. In addition, the model coin itself is rare, so it is very precious and worth collecting. Especially in recent years, with the increasing investment in the collection, "yuan Datou" is becoming more and more popular, and the price is rising all the way. Therefore, the vast majority of people in the industry believe that "yuan Datou" is a "black horse" in the collection of ancient coins, with high appreciation potential.